Different Architectures and hardware configurations for ArcGIS for Server

There are three main components in ArcGIS for Server, a Web Server which receives requests and forwards them, and a GIS Server which processes and executes the requests. And the configuration store which holds details of the Server Site. The three components can be arranged into different architectures. Following are some illustrated architectures:


It's every man for himself. 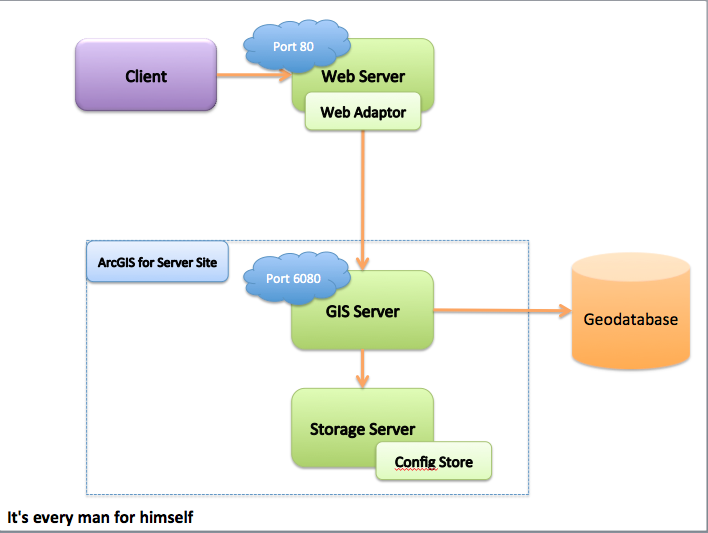 The client sends a request to consume a GIS service to the Web Server on port 80 (by default, this can be changed of course) the web server forwards it to the Server Site to a GIS Server, the GIS Server will need to fetch some details from the configuration store about the Server Site, the GIS Server processes the request, it might need to connect to the geodatabase to fetch some data.
This model, It's every man for himself, shows how to distribute servers so everyone can perform one task.

Advantages:
Better management as each node can be monitored separately.

I can do that 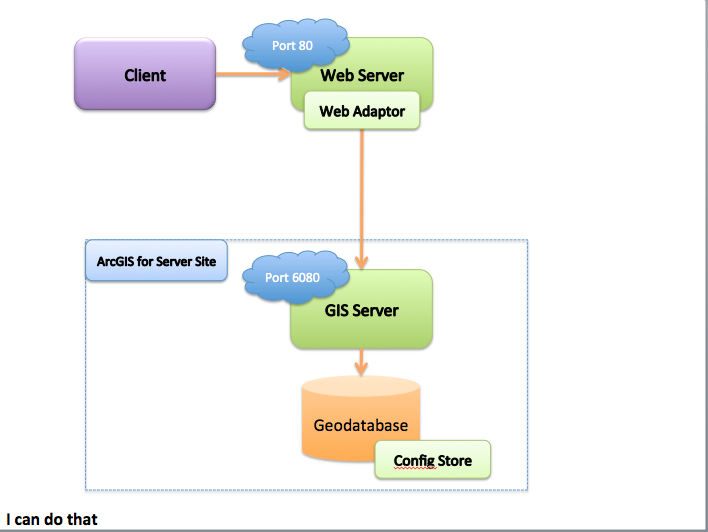 This model is similar to the previous one, the different is that we got rid of the Storage server for the site configuration and placed it with the Geodatabase Server. The geodatabase server can do the job of the storage server.

Advantages:
Saves one server and higher availability as configuration data is located with the geodatabase.

Disadvantages:
- If the Geodatabase failed the entire Server Site will collapse since the configuration store will no longer be available
-Heavy networking. 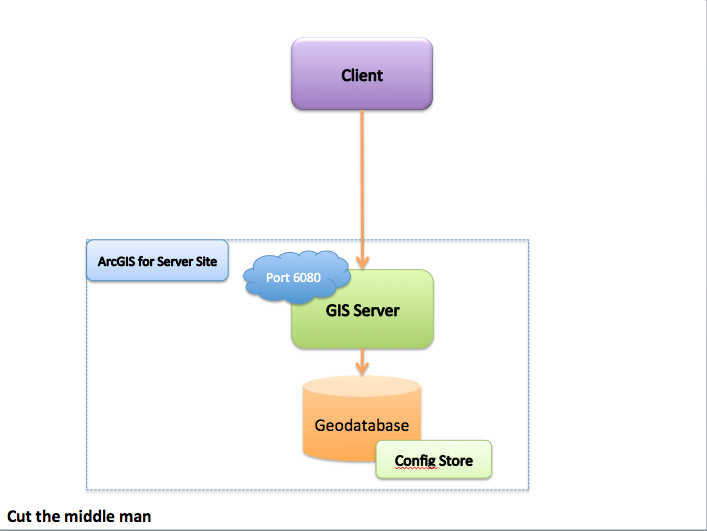 Disadvantages:
-Port 6080 should be opened by the firewall, thus introducing security vulnerabilities.
-No control over who can access the server, which was the job of the web server.

Keep her out of this 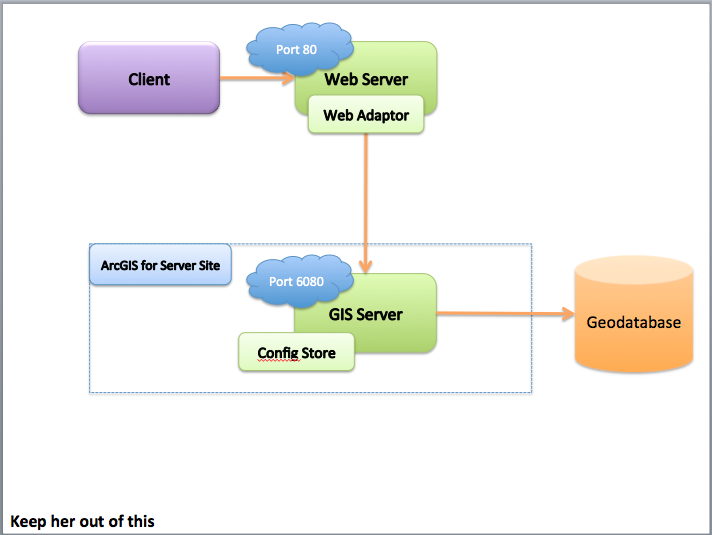 Keep them out this 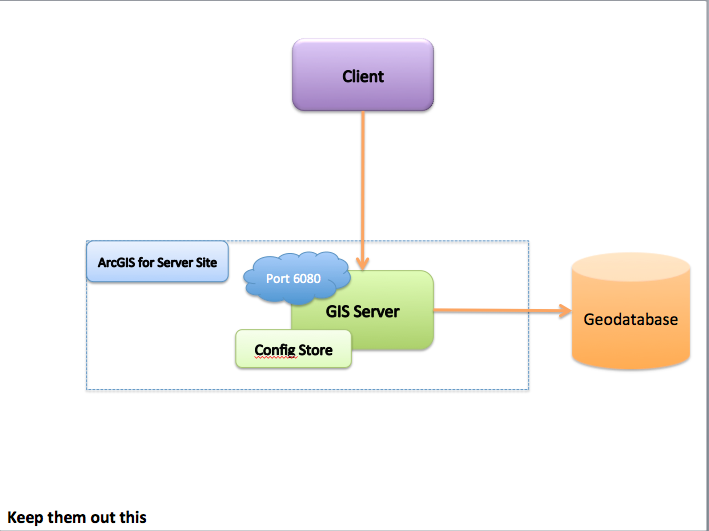 This model is similar to the previous one, except that the Web Server is removed, thus less configuration and servers. 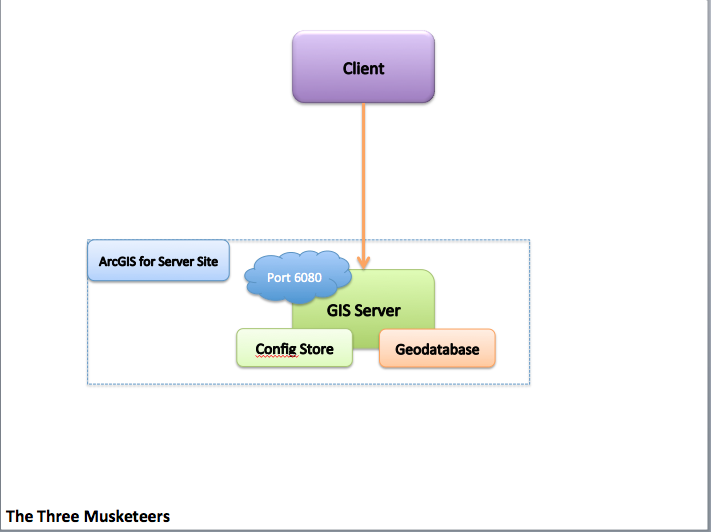 Advantages:
Redundancy, if a server failed another takes over and have all what it needs
No Networking Traffic, fast retrieval of data. (Data Locality)


Redundancy again, since if the geodatabase changed you have to update all GIS Servers. 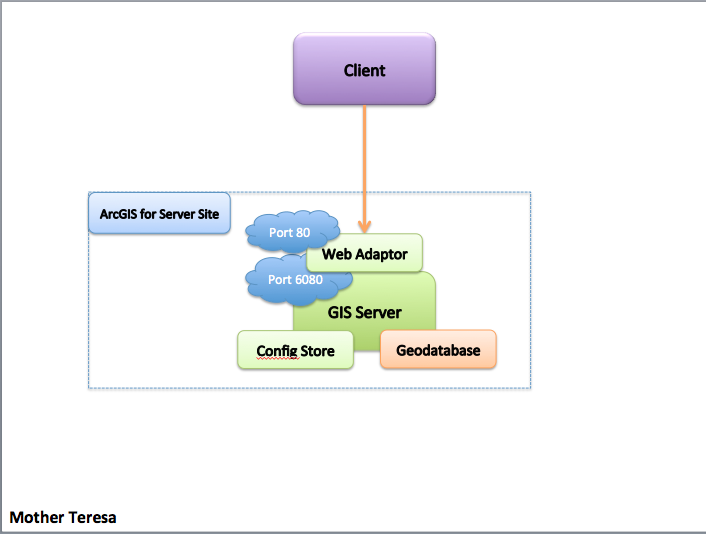 We will introduce another topic where we explain multiple GIS Servers in the server site.