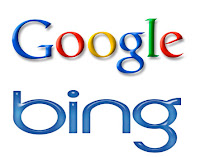 Microsoft rebranded its Virtual Earth now into Bing Maps, I thought I Would like to list a quick comparison between the two.

Here is a mashup of Google Maps and Bing Maps

1. Data
The data is way more updated in Google Maps then in Bing, But its just a matter of time until bing update its data.

2. Developers
I suffered while I want to develop a small example in Bing Maps, didn't easily found a "Hello, World" Bing Maps. Google Maps are much easier to develop through Ajax API.

However I found it so easy to develop an ASP.NET application with Bing Maps, its greatly documented here for those interested.

3. Documentation
Google Maps are rich in its documentation with all its examples and Ajax-PlayGround. Call me stupid but I just get confused with Microsoft way in documentation Here is Bing API. They write ALOT and I hardly see any example. I would love some live examples. More examples, more code, less talk please.

4. Browser Support
Google Maps support 3D images without any plug-in, Bing Maps need to install a 3D plug-in. Sadly that plug-in is not avaiable for my Mac - Firefox yet.

5. GeoProcessing
I liked this one, you can do geoProcessing and return Imagery data from Bing, I don't know if Google Maps supports that, please correct me if I'm wrong.

6. Accuracy
Big claps for Bing in this, I searched for Bahrain in Google Maps, it pointed me somewhere in the sea, however, when I searched in Bing Maps, it directly hit the center of the Island (Y), same goes for Sakigahara the Village in Japan.

Here is a quick "Hello World" for Bing Maps

Here is a quick "Hello World" for Google Maps

Also, our friend Andrew have done a quick comparison between most of the maps applications, you can find the pdf here.