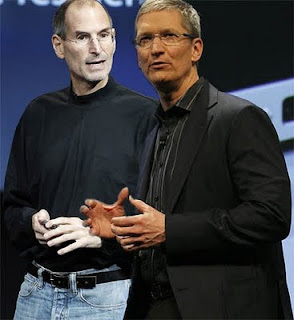 Yesterday the 24th August 2011, Steve Jobs resigned from his position as Apple CEO and jumped as the Chairman of the Apple Board. Jobs has followed a successful base plan for Apple during his time as CEO. He is well-known for the iPod, iPhone, iPad and iMac.

I'm sure that Jobs did not resign before putting down a comprehensive strategic plan for the next 10 years for Apple. If Tim Cook (the new CEO of Apple) well executed that plan, keeping up some strong defense measures towards the raising giant of Android, Apple could keep on shining.

You might already know that Cook ran Apple during Jobs health problems. Will you still see an iPhone6 and iPad4? Will it be as sexy as the previous gadgets? Maybe yes. Maybe no. Maybe even better.