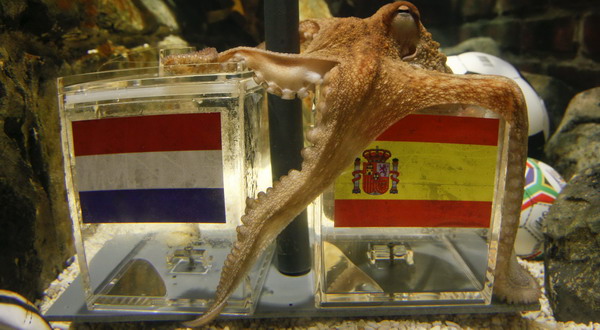 If you didn't heard of Paul the Octopus, it’s a Psychic octopus that Germany used for predictions to its World cup games.
So far Paul did a 100% prediction in 6 games.
Here is its prediction for Germany VS Spain in the semi final.
So how did this work?
Paul's first predictions (Ger vs Eng) (Ger vs Ser) and (Ger vs Arg) might have been a mere chance, but not the last one (Ger vs Esp). Quantum Mechanics took care of this one.
After the win of Germany against Argentina 4:0, Paul the Octopus received a huge media boost, through social networks (Facebook, Twitter, YouTube) not to mention the classical Newspapers, and TV.
This media explosion amplified Paul Quantum wave function (the frequency on which the Octopus works) most people now believe in Paul, some for the mere love of their teams, and some even for religious reasons.
All these people sending their approved thoughts and true believe to this creature makes this wave function amplifies exponentially. These thoughts become so sharp, so clear, so thin that increases what physicists called the Energy Density and make those thoughts move to a part of the brain called the Frontal Lobe. At this time, those thoughts, those ideas, those concepts materialize into tangible events. These events cause the predicted team for example to play harder, the other team get tensed, distracted thus make more fouls the other team get more free kicks, and so many random events may occur to support the predicted team. Events that are unleashed from the shared Super String.
Now, some of you will say well, not all people believe in this octopus and I totally agree. Some don't believe and they deny it but deep inside they have this fear of his predictions becoming true. This fear is enough to materilize into a potentional amplifer for Paul Wave function. Some people won't believe Paul at all, but they are few compared to the masses. Which make their wave function nearly neglectable.
This is the new science of Quantum Entanglement, Everything is connected.
at 1:31:00 AM