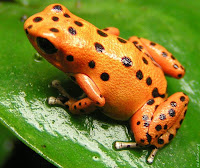 This thought experiment is somehow similar to Schrödinger's cat Experiment of Quantum Physics.

Hussein's Frog
The experiment goes as follows. If you ask a random person, whom you don't know, to think of an object. Then instructed him to obtain that object, place it in a box and seal that box. Assuming a condition this person does not disclose the content of the box to anyone. We will have a sealed box with an object that only one person in the entire world, our world, knows what is it.

The second step of this experiment takes place after that person leave this world, (i.e. dead). Next, fetch the box and before opening it, wish for a frog to be in that box. Imagine the frog inside the box before opening it and when you do open that box, you will always find a frog, or whatever you wish for. The frog, according to Schrödinger's, will be of course both alive and dead at the same time up until the moment we upon the box.

Why is that?
The reason, according to quantum physics, is that whatever was inside that box was there because our person puts it there. He knows about it, he was the only one affecting its existence. With our person gone, the box can freely contain ANYTHING depending on the power of the direct wave function affecting that box.

Exceptions
If the person we instructed to take the object told someone about the content of that box, the box content will snap "back" into that reality. If people start guessing whats inside the box you get all those probabilities and its up to the strongest wave thought function (or the sum of the thoughts with the same frequency) to create the reality. Basically uncertainty principle plays the major rule here.

So for our experience to be effective you shouldn't tell anybody about it.