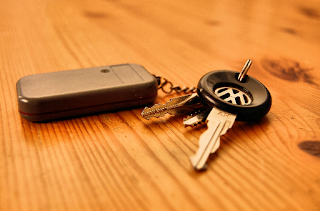 When you open your car with its keys, you're brain is wired 100% that the car will always open. Because you believe it will open no matter what. In fact there is no room for thinking of a slight chance that it won't open.

Now somebody asked me.

What IF I replace your car keys with ones that look just like yours without telling you. You will still be 100% convinced that the car will open with those keys but it won't.

This is interesting claim to make. However, in this case whoever replaced my car keys, his thought wave function is much more stronger than mine. Now HE is 100% sure that my car will not be opened with the keys I have and his conciseness travel in time at the incident event and affect the reality of me being unable to open the car.

The Reason is that we are all entangled and we affect each other thinkings.

Now, suppose for example, if we can assume that a computer did the replacement of the keys (randomly) without you or me having any knowledge what keys the computer will replace, is it the right or wrong. In other words your consciousness and thinking doesn't play any rule in this process. I will always open the car no matter what keys the computer selects. Because I am 100% sure that my keys haven't change and I am unaware of this computer replacement process.

There is an exception as well to this paradagm. If you are "Watching" the computer replacing the keys, or thinking that "ok, the computer will pick the wrong keys.." this also affects the result, or say you have a desire that the computer to replace my keys with wrong keys. In this case its up to the uncertainty prenciple. You may say its a battle between my conciouness and yours. Most probably I will win.

So for this thought expirment to be true, you shouldn't be able to play any rule in it by any means. That means, you should place that machine in a closed room and let it do the keys replacement.

OK, Someone somewhere must have picked keys so similar to his keys but are not his, he was 100% convinced they were his keys, no one has interfered in him picking the wrong keys, yet I'm willing to wager they were unable to open his car.

The car keys will not open in two cases:
1. If our guy discovered that those keys aren't his before he actually opens the car. The keys won't open.

2. If our guy (or anyone else) WILL discover sometime in the future, say after one month or two months or two years that the keys aren't his. The car will not open NOW. This is an example of how the future can affect the past. (I will elaborate on this more)