Microsoft VS Google: Is this going to be the end for one of them? 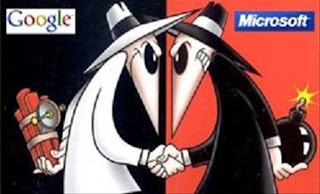 Google started with Search, strengthen its defenses very will in that area, swiftly moving to other fields while maintaining its core business.

Microsoft was watching this swift move all the way and come up with its own great inventions too along the way. The Windows operation system is not wildly used for no reason. It's flexibility is highly commended. Here is a post I wrote about Windows Flexibility.

Microsoft was very careful to watch every step Google makes. Google stayed away from Microsoft main business for almost 10 years. Until now.

The Battle
Google armors it's tanks to Microsoft OS by releasing Its own Chrome OS. It came in the right time, with the Powerful Windows 7. The IT world will witness a great battle.

Define: Winning?
If Google wins, Microsoft will be highly affected. No body knows what will happen. But I'm sure there will be a huge inertia released from Microsoft 25 Years of Experience. That will remain for few more years.

If Microsoft wins, Google will witness its first failure that will potentially wound and harm the Google Brand. Google doesn't have that Microsoft Inertia.

I even don't know what 'winning' is in this case. Still there will be fans for Google, Microsoft, Linux and Mac.
at 11:23:00 PM