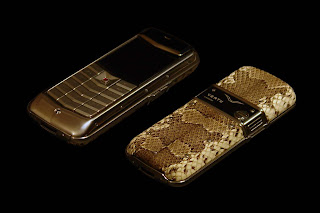 The question: Which smartphone should I get? has become irrelevant. Whether iPhone or Samsung or HTC or Sony or LG or Nokia or even those Chinese replica, they all do the same thing. You can still call, browse, text, chat, play and email. Having an eye tracking option or water resistivity is something that sounds attractive but it is not a deal breaker. Not even putting the volume controls behind the phone will do.

It started with the introduction of the iPhone when Steve Jobs re-invented the smartphone,  every company then started to follow that paved path. If I could divide the market into segments, I would say there are about two segments now, the average cost devices which everyone is getting, like iPhones, Samsung, HTC. Then there is the low cost devices which samsung and other companies are targeting as well, cheap smart phones for low income, they are not as smooth as the original ones but they do that job. 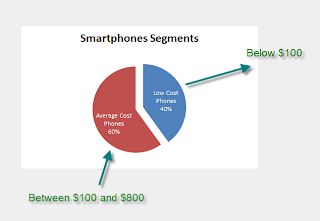 This market is satisfied, Steve Jobs realized this back in 2010 and moved on, just three years after the iPhone is released the SmartPhone market is getting saturated slowly specially with the Android coming into picture and the fleet of devices that came with it. Jobs refocused and saw a gap in the market for a device larger than the SmartPhone and smaller than the laptop, he squeezed-in the iPad and it was a great hit ending up harvesting an entirely new market for tablets.

However I believe that smartphone market has a hidden segment, this segment has settled with average cost phones whereas they could afford much more. Those are the luxury or high cost phones, if a new company could come up with smartphone that shares the same software as an iOS or Android but with high end specs and distinctive luxurious design. So those who get it can brag about it, the 60% market segment will be slashed into two segments like follows. 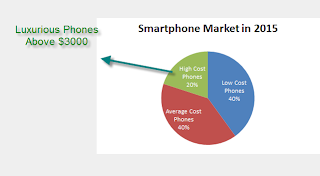 This segment should not be completely different when it comes to software, remember those rich people and celebrities still want to play candy crush and minion rush. It should just make phone into a piece of accessory. Vertu is trying to space this segment slowly by its introduction with the Android phone. But still something is missing, someone should figure out what flavor is missing and add it. You can't just slam a ready made android software into a luxury phone, it should be customized I believe to be luxurious.

Five things this smartphone should have:

1) It should be extremely simpleSince it is designed for celebrities and rich people, those people probably want the simplest things in a phone basic stuff, adding more will confuse them.  3 to 4 Apps tops by default, of course they can install and buy if they want.

2) No Gimmicks
Tons of camera options and settings are not for this segment, they want to click a button to take a picture of them while enjoying their time in The Hamptons and send it. They don't want to know or care what HDR or 1080p means.

3) Extensive sharing options
Forgot other phones, and focus on enabling easy sharing between similar phone models only. Always enabled NFC will be nice for them.

4) Compact Size
Not too small yet not too big, remember it should fit into a fancy clutch.