Nokia could have done better 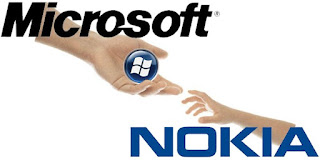 Nokia had a choice to go with Andriod as everyone else did, or stay arrogant and stick to its dying Symbian.

It did neither, in Feb 2011, Nokia entered a partner-ship with Microsoft, Nokia would use Windows as their  primary mobile OS, Microsoft will use Nokia as their hardware maker.

16 Months later, Microsoft announced Surface Tablet, which Microsoft built on its own, behind Nokia's back.

But Microsoft, you had Nokia as your hardware vendor, why you didn't hand the surface to it?
"Its a Branding Thing"

In other words, Nokia brand sucks, imagine the Surface with the Nokia hand on it?

This is the moment where the Thai hooker takes the blade and cuts herself. I bet Stephen Elop is biting his nails.