What #SOPA will do to you 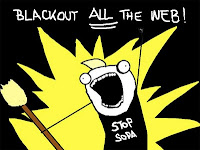 I think the Illuminati is taking over the world very soon. Is the 2012 the end? [If I didn't reply to your comments I'm probably in jail for linking to Wikipedia]