Back in June, I decided to write a small pokemon game on top of Twitter. I didn't know that it will require a lot of development work and time and testing.

So I decided to release the first draft version of the game today 7-9-2009. Click Here for the Game

1. Login to Twitter and Pick your Pokemon
When you login with your Twitter account, you will be prompted to select 1 one out of 3 bird pokemons by default yours is Level 5 and you fight your way with the Computer on top of Google Maps. 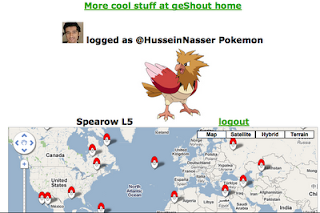 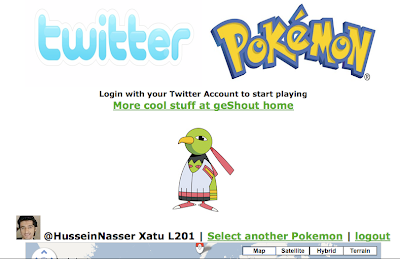 2. Pick a Pokemon to fight
You click on any pokemon ball it will popup open showing the pokemon in it. Clicking fight will start the fight. 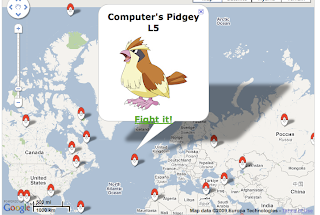 3. Defeat them and increase your level
When you click Fight it! A new window will be opened for the fight to start. You have a text area where you can write and tweet any message you want. 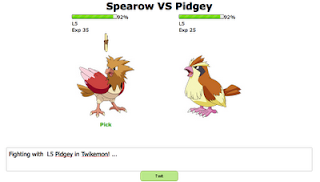 As you fight more Pokemons and defeat them, you're level increases, and as your level increases you will have more attacks. The Default attack for Spearow is "Pick"; With time it will evolve to Fearow so does the rest of the pokemons.

This is more like an alpha version just to test the game, only 7 Pokemons are there. All pokemon pictures are taken from pokemonelite2000


You will also see the top 5 Pokemons Twitters 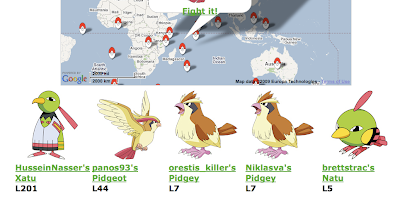 Enjoy, and let me see if there are any bugs or enhancements

I had fun programming it but it is so difficult!! That's why this maybe the last time I design a web game, I need more tools and time.
at 8:50:00 AM